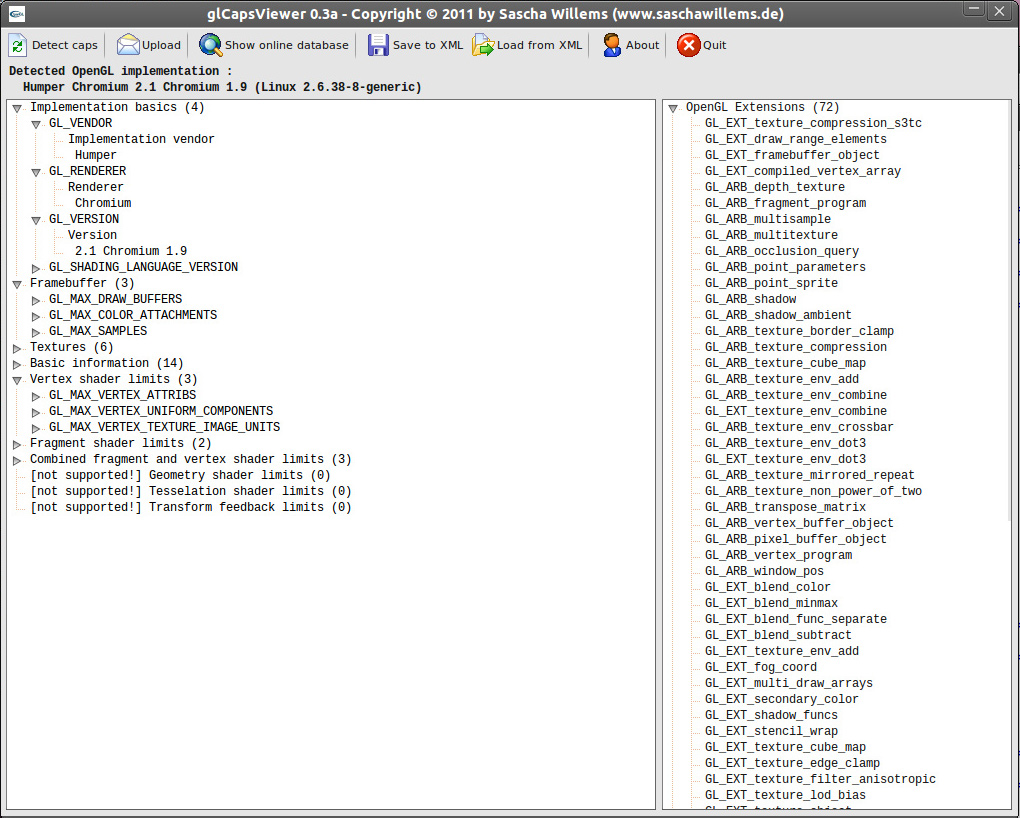 If you’re creating OpenGL apps (no matter if games, apps or demos) that you want to distribute, you often get error reports from user with the oddest things happening on their systems. Recently I distributed a benchmark for “Phase 2” to some people and after hours of trying to get it working for everybody I noticed that some of the testers had graphics cards that supported shaders (vertex and fragment) but no framebuffer objects, a pretty odd combination.

Back in the days (several years ag)o Tom Nyudens from delphi3d.net (don’t go there, it’s no longer online) had a tool that read out an OpenGL’s implementation details (extensions, max values, etc.) and would store them online so every developer could go there and check what graphics card had which OpenGL capabilites. But sadly that tool along with the database went off when the site went down long time ago.

So I decided to end this deficit by creating such a tool by myself, simply named glCapsViewer. It doesn’t only read out all important OpenGL implementation details but is also able to upload them to a preliminary “database”, so developers can easily check out OpenGL implementation properties online. You can check out the preliminary database over here (not much in there yet, but that’ll hopefully change soon). Feel free to upload your own reports (but please for real hardware only, no need to upload a report for e.g. virtual box GL implementations or MESA) but note that I plan on doing a real database (the current one is just a list generated by the XML reports that have been uploaded) so at some point that database may be wiped (though I hope to integrate the files into the new one instead, only if possible).

An yes, some may have noticed that I actually uploaded a first version of it (created in Delphi) some days ago but decided to wait before announcing it to the public until I added another platform, and that’s what I just did, so here is the official announcement. I ported it over to Lazarus (and FPC), installed ubuntu in a virtual box and created a linux port too. So now you can upload reports from Windows and Linux (i386), other plattforms (like Mac OS) may also become available in the future, but don’t count on it. And yes, this is a first for me after ~20 years of coding, my first own application with a linux port. So now that a lot of people asked for linux versions of the apps/demos/games I did hopefully a lot of linux reports will be uploaded.