Believe it or not, but the 1.35 release of Newton is almost upon us! We SDK-developers are getting constantly updated SDKs (almost every two days or so) and it looks better and better with each SDK. The only thing that’s really left for the Newton makers is now the overhaul of the vehicle container and some tweaking and testing.

Julio (the main man behind NGD) already said that he wants to release 1.35 this year, so it should happen within the next two weeks (but please don’t put any bets on it). He’s doing a great job, and the constant updates allowed us to test out 1.35 and report any bugs and errors we encountered (which is rather easy with my NewtonPlayGround, as you can directly see how or what changed compared to older releases). So in the end that long wait also means that Newton 1.35 will be released as a througout tested and stressed product, which shouldn’t have many bugs or problems upon it’s release. If you compare that to the many products that are released without proper Q&A (and therefore are full of bugs and stuff, I especially talk about current games that are rushed out before christmas season), you should be glad to get a stable (free) product. 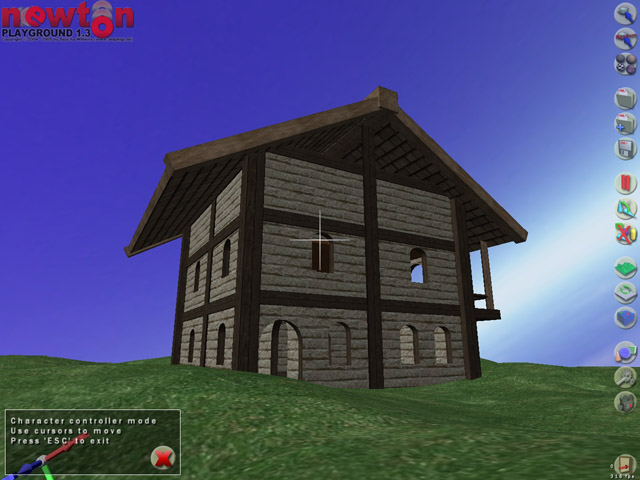 And though I don’t get much time to do coding (as already told by me in my last postings), the NewtonPlayGround is still under developement. I’ve recently added a Character Controller (like the one from the SDL character controller demo on my Newton page) which can be configured to your likings and which then allows you to run around in your own scenes and to interact with other objects, cause the character controller itself is realized as a full physics body. And since this is fully integrated into the PlayGround, it also means you can pick up stuff while running around, throw it, take it with you and so on. So basically it’s like the gravity gun from Half-Life 2.

You can see that fine screenshot there, which is a demonstration level I built for the new character controller?Yes, and that’s one of my current problems with the PlayGround. Currently I really lack time and (mostly) motivation to really do anything productive (hence the slow updates here on my blog) but what the PlayGround needs are scenes that demonstrate all of the new features. Many of the scenes that are currently in there still are from the earlier releases and not only feel dull, the also lack visual polish (the first versions of the PlayGround didn’t support textured objects). So I really need to sit down and create some new scenes that demonstrate the PlayGround’s current state in a visually at least somehow appealing way. And that’ll take time, much time. So I guess I’ll have to concentrate on modelling new scenes for the next few weeks, at least if I can motivate myself. So right now I think that I’ll be releasing the new version one month or so after 1.35 is there (which would be January 2006).