My first ever mobile app is now available over at Google’s PlayStore! This is a premiere for me, and though I wasn’t on wether to spend the 25$ registration fee for the google’s developer console, I hope many android apps and games will follow. 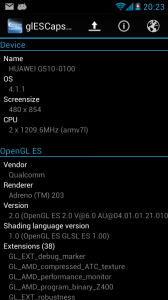 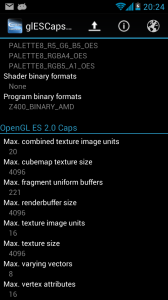 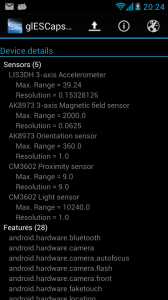 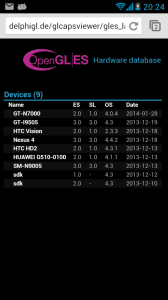 The OpenGL ES CapsViewer is the mobile counterpart to the OpenGL CapsViewer, reading the OpenGL ES implementation info of your Android device, as well as device information that may be of use to developers. As with the desktop counterpart these reports can then be submitted to the online database, where (game) developers interested in creating OpenGL ES apps for the android platform can take a look at the capabilities of the different devices.

It currently supports the following features :

As for the hardware requirements, it should work with Android 3.0 (and up) and needs OpenGL ES 1.0 to work. I’m not that deep into android development, so I may be  a bit off with the requirements, and I’m not certain on wether there’s any use in adding support for handsets with old Android version (2.x and below).

Please note that this is the first release, and that I only have limited ways of testing. I did tests on several mobile devices (my Huawei Ascend G510, differnt current Samsung devices and several emulators), so this first release may not be as stable as I want it to be ;)

So if you encounter any problems or crashes, please drop me a line and I’ll look into it. Also note that that online database is a work-in-progress too, and stuff like comparing reports will be added at a later point.

I hope this Android OpenGL ES hardware database will become as valuable to the developer community as the desktop OpenGL hardware database, which is currently approaching 500 hardware reports. So let me use this posting as a way of thanking all of you that contributed (and still contribute) to that database!