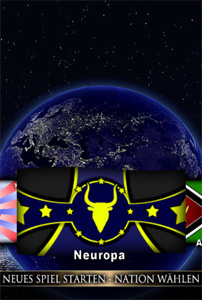 Something that has been lacking in “Phase 1” was replayabilty or better said the motivation to replay the game. This was mainly due to the fact that there was only on single game mode (now called “default”) to choose from in both singleplayer and hotseat games. So basically each game played the same except for maybe the player playind it different or the random factors that change some of the AI’s behaviour.

So for “Phase 2” I started implementing new game modes as well as the possibility to change some more game settings than in “Phase 1”. This should add a lot of replay motivation, cause the new game modes will change gameplay, how much depends on what mode you choose.

So here is a preliminary list in addition to the default one (the modes below will be in the game, but some of their mechanics will change, and it’s also possible that I’ll ad more modes) :

This mode will display an alternate history in which the origins of the nations have been randomly scrambled. This means that e.g. Neweurope will occupy the regions of Übermerica along with the Oceanic Front being located where the Arabian League used to reside. Other than that the mode will mostly play like the default one. Think of it as a mode with random spawn points.

Last stronghold (aka People’s uprising, not sure of the name yet)

The people were upset with their leaders after they’ve been mistreated for deacdes now with their homes and cities crumbling under endless wars and conflicts. So they started to organize and to dethrone their power-hungry leaders. At the beginning of this mode all leaders have been pushed back to their strongholds (special regions marked in the game’s editor) where the are protected by their last personal guard. So all regions except these strongholds are hold by rebels in the game’s beginning and the players will have to reconquer them. Other than this regional difference the players will have unlocked all military techs and have a nice personal division deployed in their stronghold.

The globe has been ravaged by countless centuries of war and environmental damage and is at the verge of a global climate collapse that’s about to destroy al life on earth. But still the leaders of the world’s nation only think about their own advantage and about making a name in the history books of the soon-to-be-gone human race. So different to the default mode all players only have a limited amount of turns to finish their bunker as much as possible to escape  earth’s climate collapses. Right now I plan to replace global project list with a list of different construction parts for the bunker, and the winner who has finished most of them when the game will win. And also earht’s texture will be replaced by a dead and dryed out version of the normal texture.

This mode will make for a great dynamic and diffifult to predict gameplay. Actually the basics of this have already been layed out in an early design document, but will now be implemented via it’s own game mode. So upon the start of each turn every player/nation will be “awarded” with three bonuses/maluses that’ll be active for this turn. So e.g. you can get bonuses like lower building costs, higher military strength, faster research but you could also be out of luck and get maluses like lower earning, falling stock prices, slow research, etc. There’ll be a pretty long list of bonuses/maluses with each of them having three levels (minimal, normal, high). This mode should add a lot of fun cause it’ll shift away from pure strategy to a bit more luck to rely on.

So that’s the preliminary list of planned gameplay modes for “Phase 2”. What do you think? Do you like the modes? Or do you have ideas for totally different modes or just want ot have one of the above modes changed? If that’s the case, just put up a comment.