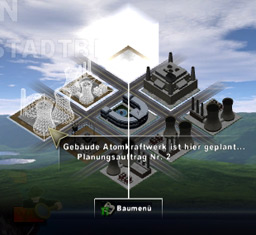 This is something I’ve been thinking about for a long time now and I was pretty unsure wether it would be a good idea or not, as it would change a fundamental part of the gameplay, what I’m talking about is constructing buildings in your regions, a very important part of the gameplay that you spend a lot of your time with.

Up until now you’ve been able to construct only one building at the same time in each region, forcing you do revisit a region once this building is finished in order to start constructing the next building. Especially in the beginning of a new game this would mean you’d visit all the regions where you constrcut buildings every single turn (as most basic buildings are finished within one turn), resulting in the same task being done over and over again.

So in order to make constructing buildings less monotonous, I decided to add a regional construction queue for buildings, pretty much in the vein of the construction queue for military units but with one big difference. For military units you can construct 4 at the same time, while the rest is on the waiting queue until an active spot is freed when a unit is finished. For buildings this would influence the balancing and gameplay too much in my opinion, so I went for a different approach. When your start out only_ one building can be constructed at the same time, but you can plan up to two additional buildings_ (both values can be influenced, e.g. by a special global project that may let you construct two buildings at the same time). So if the building currently under construction is fnished after ending your turn, the next planned building will automatically be constructed. This means you won’t have to visit the regions as often as in “Phase 1”, removing a lot of dullness from regional management.

And in the end I think this will benefit the overall gameplay a lot, cause during my recent playtesting sessions I noticed how dull it is, after starting a new game, to visit each and every region in every new turn just to place a new building, so with this building construction queue gameplay should improve a lot.

And yes, as you may have guessed from the partial screenshot for this posting, the regional view has radically changed. It’s now implemented into the new GUI and looks a lot fancier, is better etc. I’ll post some screenshots from the current build soon, so that you can take a look at the new regional view.