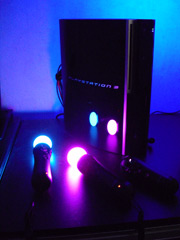 Don’t worry, this is no advertisement, and no, I don’t get any money or so from Sony for this, but it’s something I wanted to talk about since all this motion gaming stuff seems to be the future (though it’s been here for a long time now, just think of the EyeToy camera for the PS2). But this week (wednesday here in germany) Sony released it’s new Move controller for the PS3 which is based on the PS-Eye camera and which claims to be better than what the competition has to offer.

So after initial doubts I decided to give it a try and bought the starter package (camera, one motion controller and a demo disc. Yes, demos only for us, americans get a full game, but the package is cheaper over here), a second motion controller and a navigation controller, as well as Sports Champion (it seems to be ineviatable that a sports game is launched along a motion controller, as well as a a party game, but it makes perfect sense I guess) and I must admit that I’m really surprised, especially after playing the sporting events that use both controllers. For example the gladiator fights, where one controller is moving the shield, and the other one is moving the sword. Due to move’s high precision and it’s different sensors, it really feel like you’re holding the sword in your hand. You do not only swing it, but you can freely rotate it and so on.

And yes, I’ve played some games on Nintendo’s Wii (to wich the move is acutally placed as competition), and it never really convinced me. There aren’t many (mature) games that are of interest to me, the graphics (it’s actually not more than a 50% faster GameCube at all) are a real threat to your eyes on a big TV and the motion controls aren’t really precise. But with Sony’s Move that’s totally different. Aside from the obvious better visuals thanks to better hardware (and HD output) the controls are extremly responsive (something I never expected) and thanks to the camera, the system does not only track internal sensors (velocity, rotation, etc.) but also your position in virtual space. This gives a real impression on how augmented reality is supposed to work, if you for example do the archery game in Sports Champion. One motion controller is attached to your right hand and used to drag out and put in the arrow and to bend the bow, whereas the other one (left hand) is actually representing the bow which really is attached to your hand. You can move it around, twist and rotate it like you’d be holding a real bow in your hand. It’s really amazing, and this feeling of actually being able to hold a virtual object in your hand is a great one that e.g. the Wii had been lacking.

So yes, Move is great, and I hope Sony has learned from the bad launch of the PS3 and does things right this time. And if you have seen the tech demos for move, which really show off interesting stuff that’s mostly beyond your usually standard gaming fare you know what this technology is capable of. I’m really looking forward at what innovative products Move will spawn (one example is Beat Sketchers, a “game” that allows you to drawn music).

And before you ask : I don’t spend that much time gaming (real life, you know) but I’m still working on “Phase 2” almost every day, and I’ve added a lot of stuff since my last posting. So I hope to have you updated on my progress within the coming weeks.