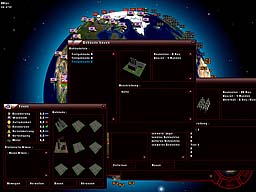 Yesterday I took the next step on the stairway to finishing my current game. As you could see from the last postings, I implemented the army feature first, and now I also implemented buildings. And after starting on implementing the feature yesterday night I did a “runthrough” and implemented the whole feature, not step-by-step as with the army feature. So I made my WeldEdit export buildinginformation to XML and ingame you can now build them in a region. Right now you can build up to nine buildings, but contrary to building military units there is no qeue but you can just have one building in construction at a time. The 3D preview is again rendered using PBOs, later one I’ll maybe switch to FBOs and use PBOs only as a fallback for drivers that don’t support FBOs.

Next step now is to create content for this part of the game. Right now I have only three buildings in there for quick testing, but already have most of the buildings for the final game written down in my design document. So I’ll start doing the descriptions, scripts and 3D models for the buildings this weekend.