Note : No programming news in this item, so if you don’t wanna know about my new gfx-cards, skip this post.

As usual, Amazon was lighting fast with their delivery. The mail that my new graphics card was dispatched arrived yesterday in the late evening and the card was already here this morning. Why I order hardware at Amazon? Because getting any of the GeForce 6800 cards for AGP is almost impossible now. I’ve tried all the hardware internet shops I know, but they either had no card or the cards in their lists were out-of-stock. I guess vendors are now abandoning AGP (no wonder). So at Amazon I found the Leadtek A400 TDH-256, which is a vanilla GeForce 6800 (12 Pipes, 5 vertex shaders) but with 256 MBytes of memory (usually, vanilla 6800 has only 128 MBytes) for just 195€ (and Amazon don’t take money for shipping orders above 20€s). 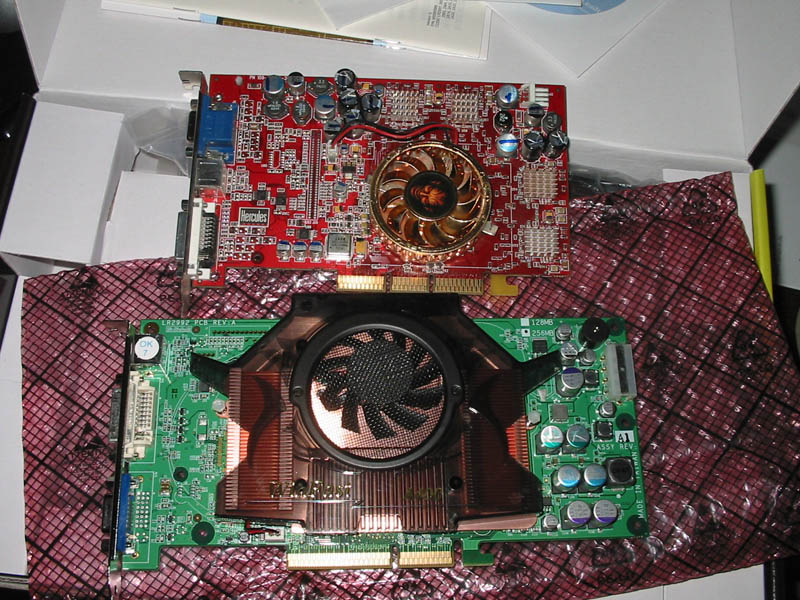 After taking out my Radeon and cleaning the PC from dust (which I do all two months or so), I installed the new card. It’s much heavier than the old card and also much bigger (longer), but no problem with my Chieftec case (spending some more money on a good case is always a good thing). See the shot on the left for a comparison. The cooler on the LeadTek is very heavy and also bends around the back of the card, but a big cooler usually means that it’s also silent and that’s the case. It’s a tad louder than the one on the Radeon, but not by much. 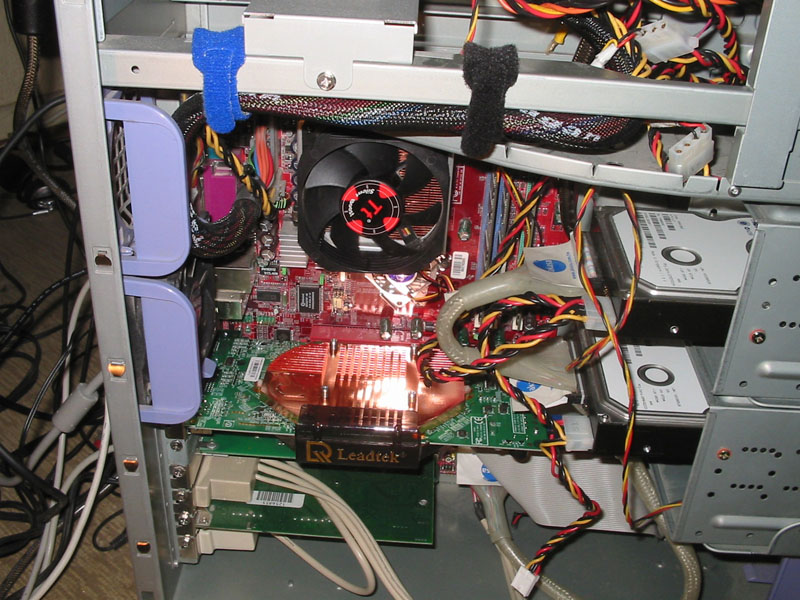 And now on to the more technical details of the card : The GPU on that card is not a NV40, but rather an NV48 which seems to be an shrinked (and therefore cheaper) NV40 (which also means that it should run cooler). It has 12 pipelines and 5 vertex shaders, so it’s not as fast as a 6800GT. I first hoped to unlock them all, but enabling the other 4 pipelines gives rendering errors, so they’re sadly not working. The additional vertex shader on the other hand is, so the card now has all 6 vertex shaders enabled. The clock speeds are 325 Mhz for the core and 700 Mhz (DDR) for the memory, which also is below a 6800GT. But thanks to the massive cooler, it can be overclocked very good and my first testings showed that it’s stable at 400 Mhz for the core and 800 Mhz for the memory. I’m sure there is still room for more, but I’ll try that later on. See the shot on the left for how it looks in my current system, and just look at how big that copper cooler is.

My impression : Well, if you buy a new videocard every year (or even every 6 months) you usually won’t spot huge differences. But since I replaced a card that I bougth over two years ago, this new one is a real difference. Though the Radeon was still a nice card and ran newer (not the newest) games at enjoyable framerates, this new 6800 tops it in every game. But not only is it faster by a huge amount, it also has some nice features that I wanted to try out, like shader model 3.0 (a big “yes” for loops and branches in GLSL) and all the stuff necessary for HDR. So as soon as I get more time (dunno when, right now it’s very limited) I’ll maybe start to write some shader demos or so again (this time with moving stuff thanks to Newton).